A quick statement in yesterday’s blog about trade volumes and corresponding cash market price moves was unclear and today’s discussion intends to clarify and expand on the point. Weekly negotiated fed cattle trade volume is a closely watched statistic by some and one of the few that provides some insight to potential packer demand and competition for fed cattle that might develop each week.

Since the cattle industry waded into the largest available supplies of fed cattle since 2011 in May, packers have attempted three times to dramatically reduce the number of negotiated cattle purchased in a week in order to pressure cash prices, relying more heavily on captive supplies and cattle bought with time.

The first time was the week ended May 25th, with a purchase of 51k head and the small buy allowed the packer to buy cattle $4 cheaper the following week, averaging $110.06. The next week though, cash traded steady and trade volume pushed to 97k. By the following week, packers were forced to replenish inventories and paid up $4 as trade volume surged to 130k.

The second time occurred the following week ending June 15, as packers once again stepped cash prices down $3 and reduced their buy dramatically to 60k head. Next week prices were pressured another $2 on a 79k head buy. Then June ended with the cash low of the year being established at $106.87 on big volume of 125k head.

But when the calendar turned to July, packers held significantly fewer contracted cattle and it was rumored a big drop in formula cattle as well. That was confirmed when the first week in July saw the largest negotiated trade volume in seven years of 181k and a $6 jump in cash prices. The charts below show the 181k head surge in trade volume the first week in July but total commitments to packers, (formulas+contracts+negotiated) only moved to the fourth highest level this year. 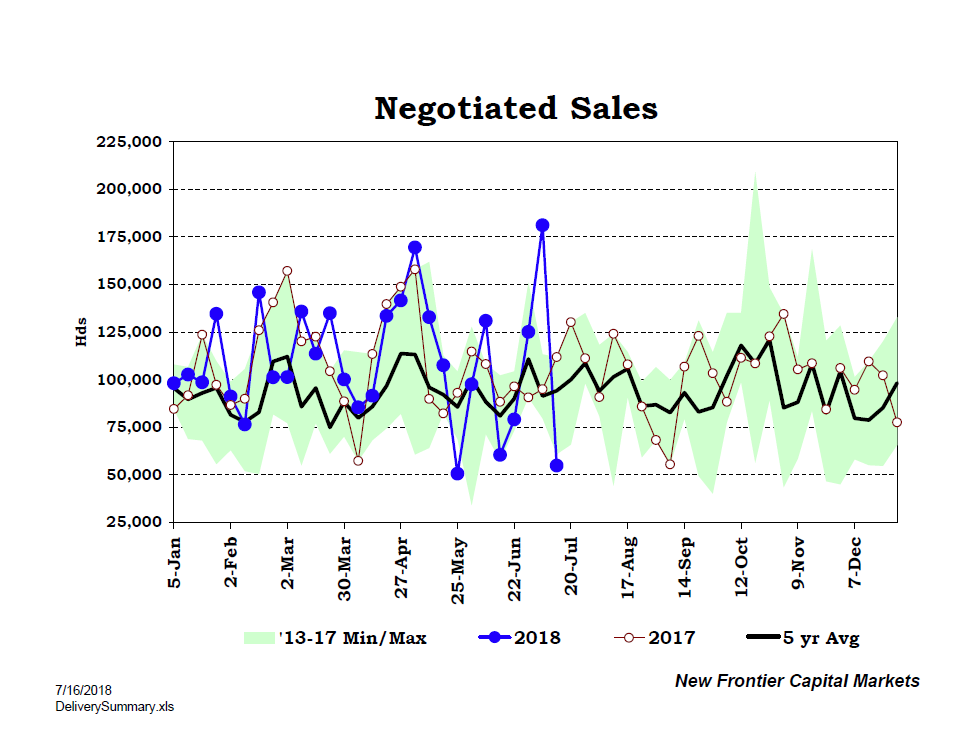 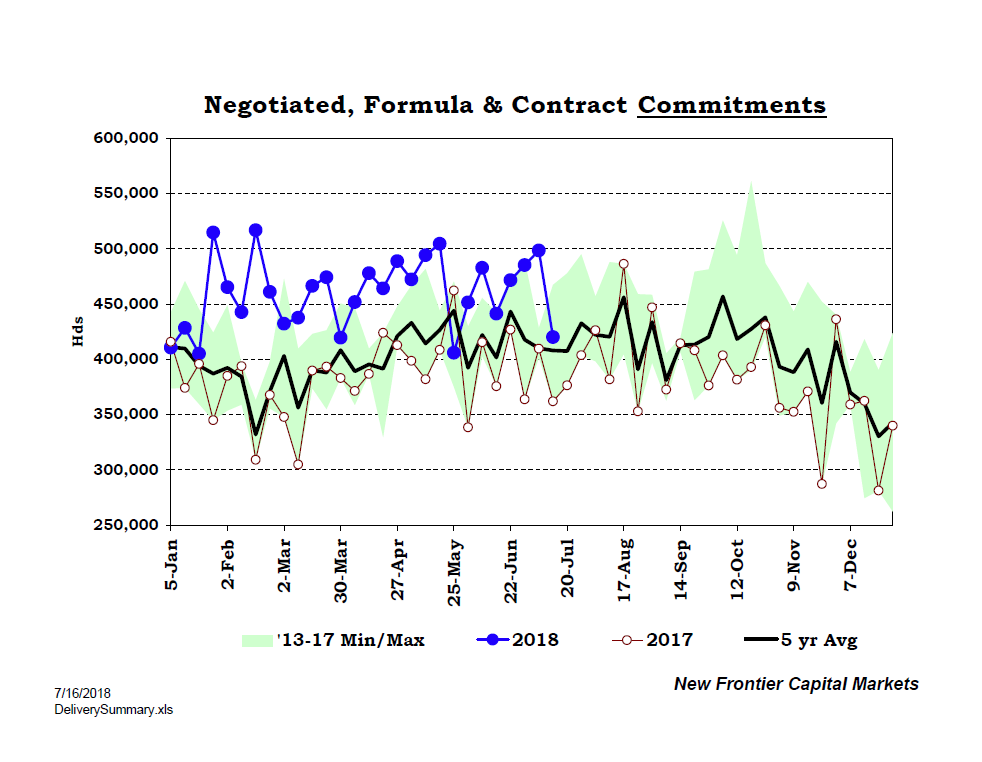 Last week’s trade volume totaled 55k head, as packers once again leaned hard to pressure cash prices, successfully peeling off $2. If recent history is a guide, this week’s prices have a good chance to hold at least steady, given the fed slaughter pace remains at 520k per week or higher and this month’s smaller captive supply. And fed cattle prices are already low. Cash prices last week were the lowest since 2010 and by late June had declined $22 or 17% from the spring high reached back in February.

There is some talk that this week’s fed kill will be smaller than last week but given that packer margins are still black and the summer boxed beef sold-ahead position is large compared to recent years, large kill cuts are not anticipated.

So, what’s the point of this rehash? Working with the assumption that our analysis is correct and fed cattle supplies have peaked and will gradually decline until Labor Day, then this tactic of reducing negotiated purchases dramatically with the intention of hammering the cash market will become less and less effective.

Yesterday’s strong and unexpected performance by CME cattle futures raises a couple of questions. Is this market setting up yet another failed rally or is this the beginning stages of a summer basis change? If cash prices did bottom in late June this year, given that it’s mid-July odds are growing it is the latter.

The Beef is published by Consolidated Beef Producers.

← Not Bad
Another Day, Another New High →