CME cattle futures have only bearish friends. Those that played for a corrective rally yesterday saw it fade well before the close. Setting aside the steep discounts to cash held by futures and the thought process of how much bearish news is being priced into this market, the bearish rhetoric is as follows. 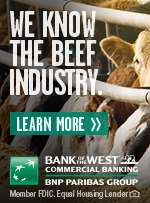 First up is yesterdayâ€™s USDA Cold Storage report was deemed bearish, showing an increase in December frozen boneless beef stocks ballooning 41% from November, although up only 0.7% from a year ago. This is certainly an indication that the grinding community didnâ€™t want to begin January 2015 with less beef in the freezers than they did a year ago, though they werenâ€™t able to start the year with substantially more either. Chicken stocks were up 2% from a year ago and though frozen pork was down 10.3%, the overall spin from the report is negative.

Next is todayâ€™s USDA Cattle-on-Feed report, which analysts estimate will show 1.4% more cattle on feed than a year ago, even with placements below December 2013 by 4%, leading to the conclusion that front-end fed cattle supplies have become uncurrent over the last several weeks.

USDA released its most recent actual weight data yesterday too and though fed cattle weights are declining seasonally at a good clip (down 8 pounds in a week) weights are still 13 pounds above a year ago adding an extra 2% to beef production, which as of last Friday, was still down 14% YTD.

Another bearish factor mentioned frequently this week is the increase in dairy cow slaughter relative to a year ago, though beef cow slaughter continues sharply below a year ago. Economic pressures in the dairy sector are expected to stimulate herd reduction for months to come and dairy slaughter is expected to exceed last year as a trend.

Relying on USDA data, *MP Agrilytics reported yesterday that the dairy cow kill is down only 1.9% YTD while the total non-fed slaughter is down 9.4% YTD. While on the subject, fed steer and heifer slaughter is down 9.1% YTD since until this week, packers have been red. This weekâ€™s kill, by the way, is still expected to come in possibly as high as 563k, buoyed by improved boxed beef sales and profitable packers. Though there have been plenty of bearish antidotes about backlogged boxed beef floating around this week but in reality, it is not widespread other than beef bound out of west coast ports for export. Issues related to work slowdowns in the U.S. and crackdowns in Asia are impacting the flow of product.

To round out this bearish round up: chart formations, open interest continues to decline to another new low, the U.S. dollar is the highest level since 2003 and global commodity deflation is a net that cattle especially seem to be caught under.

Thereâ€™s an old saying, the news follows the market, which couldnâ€™t be truer today. Thereâ€™s another old saying that at some point the selling will exhaust itself. Astute bottom pickers will keep their hands in their pockets while aggressive â€œtake no prisonersâ€ bears push this market as far as possible.

*MP Agrilytics of Collierville, TN is a proprietary provider of comprehensive livestock and meats data, analytics and research.